We had the opportunity to be sponsors of this event and help the Autism Society America raise funds for their cause.

Since we couldn’t make it there ourselves, we asked our community member Joshua aka HTTPaladin to be our ambassador at this event and write a little summary:

The Lost Odyssey - A night full of laughter, charity and deep questions

With Rob Miller and Douglisio DiMuccio as the event directors, Lost Odyssey: The Book of Knowledge was a D&D live play event held this past friday on November 15th that featured a great deal of large names in the growing industry of Tabletop Roleplaying Games.

With Deborah Ann Woll as the dungeon master, the players were Matthew Lillard, Satine Phoenix, TJ Storm, Kate Welch, Xander Jeanneret, and a mystery guest who was revealed-midgame as Luke Gygax.

The game was filmed and streamed, all to raise funds for the Autism Society of America. Taking place in the Alex Theatre in Glendale, CA, and sponsored by over thirty companies including DungeonFog, Lost Odyssey became a night of laughter, warmth, and friendship. And thanks to DungeonFog, both myself and my friend Lucia were able to attend.

Part of Lost Odyssey’s marketing was the question of “What is D&D?” in their first video on their youtube channel, and I went into my night at this event with that question in mind. 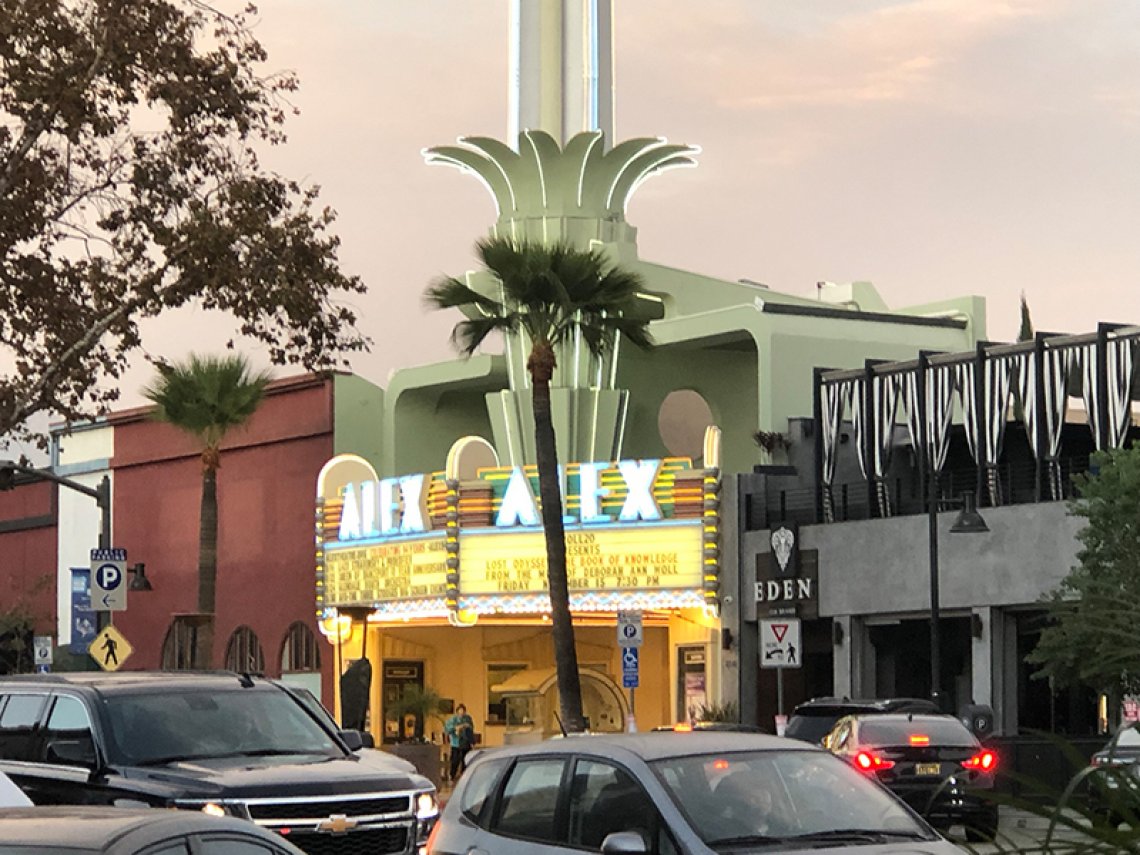 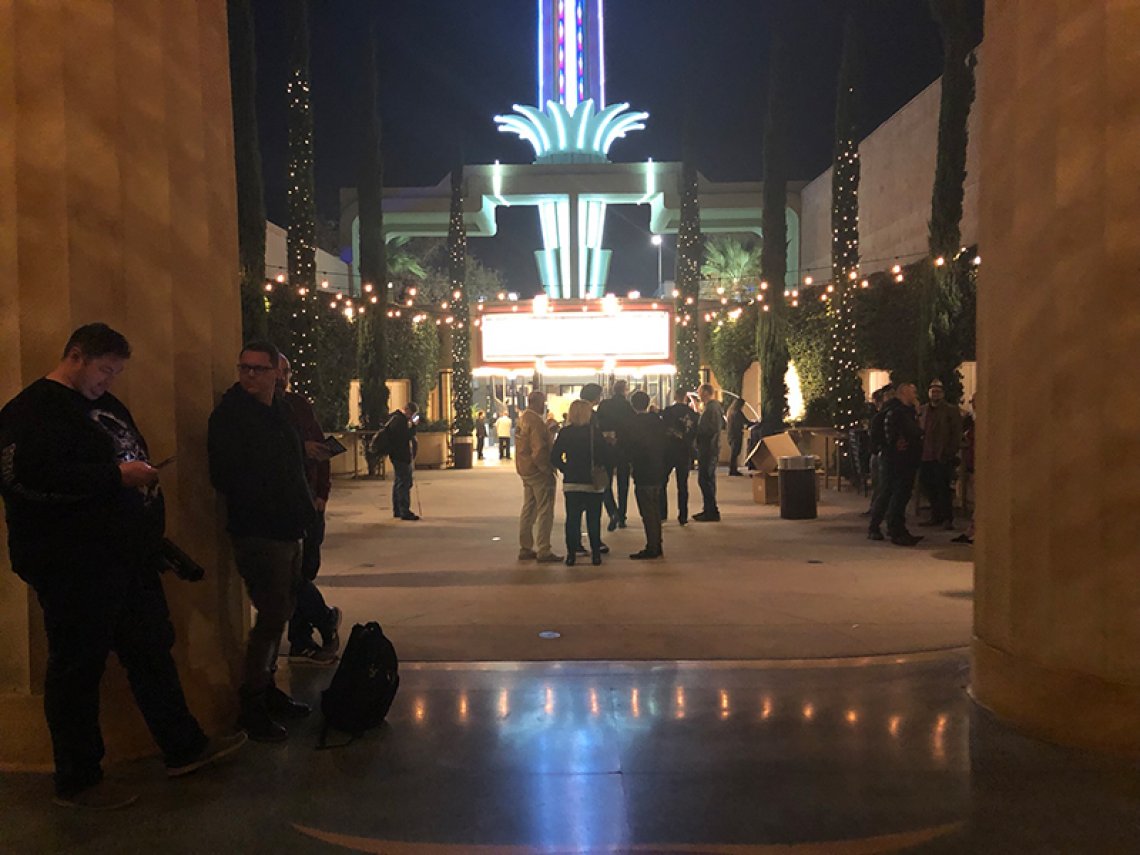 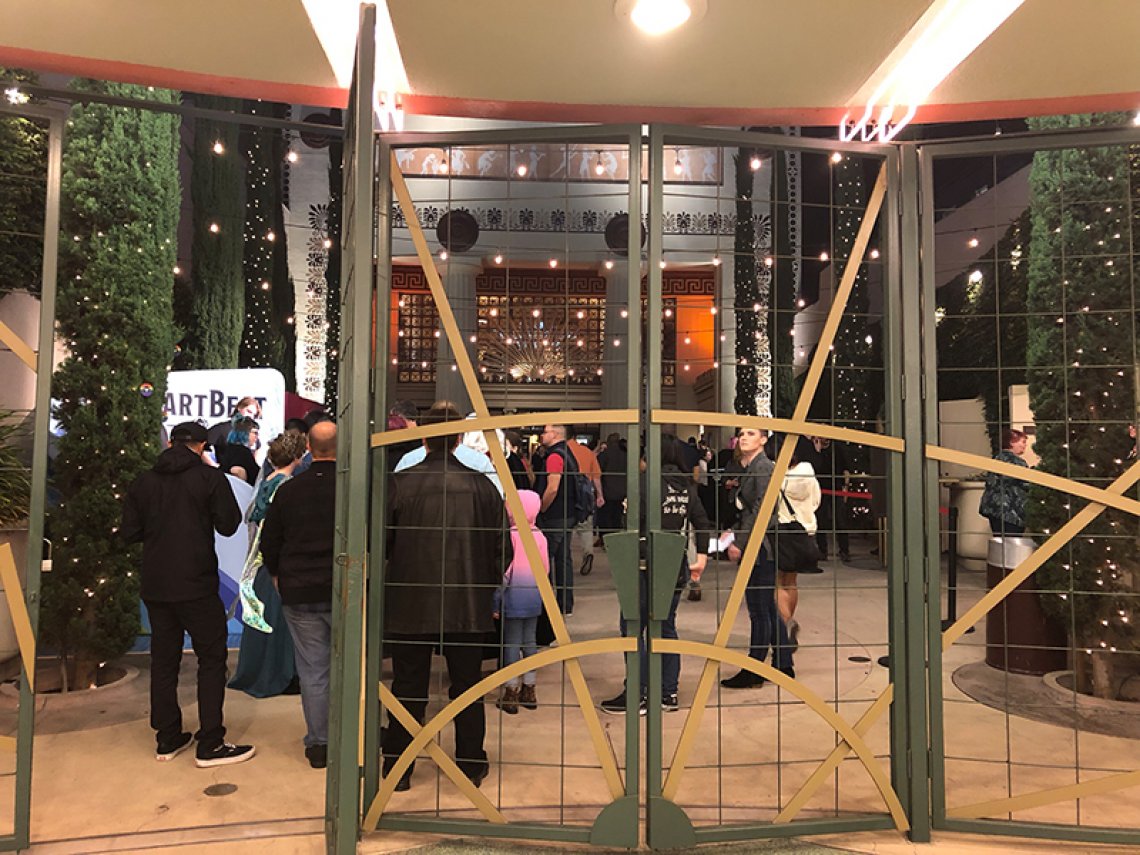 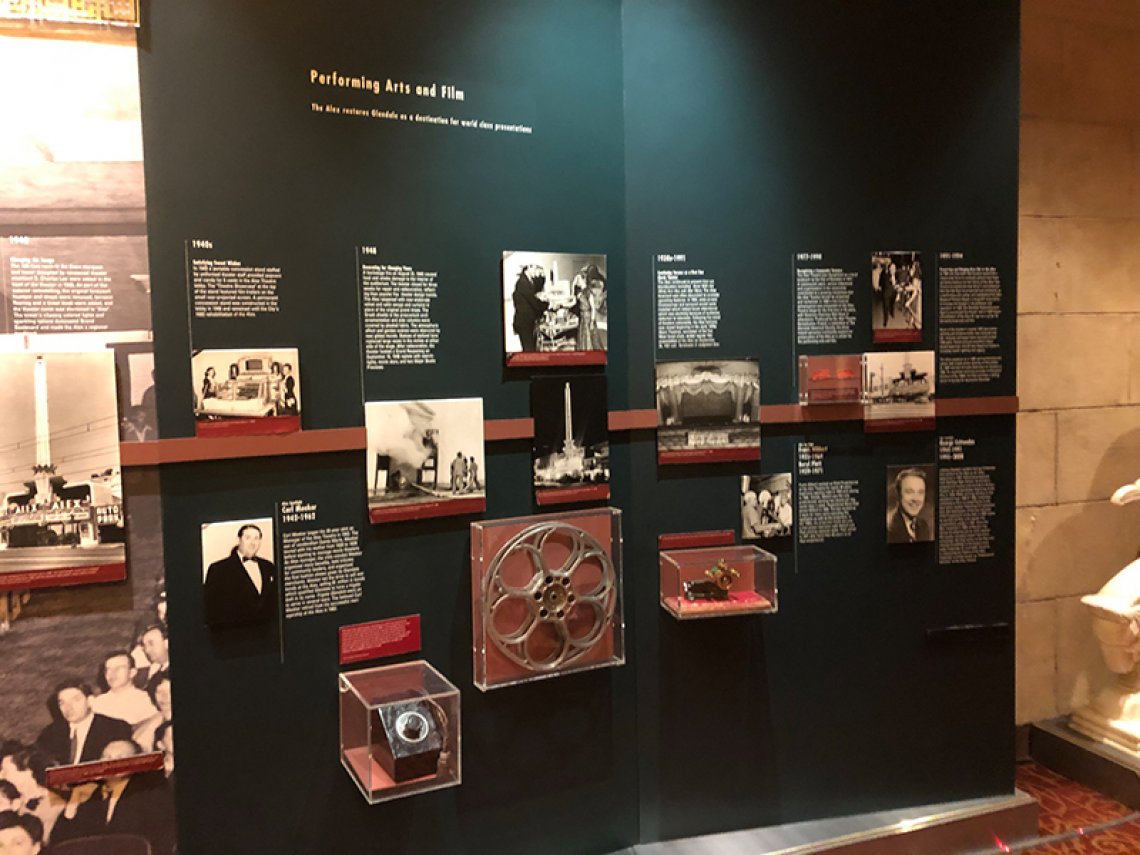 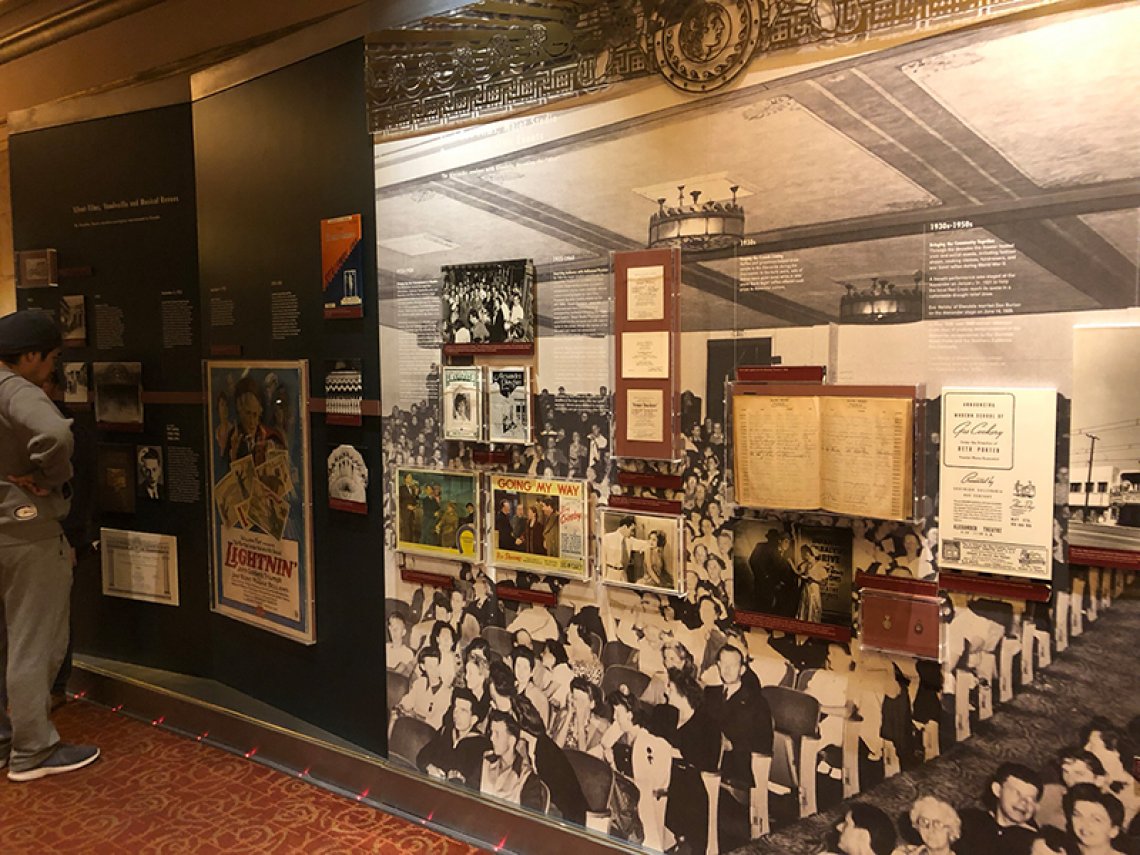 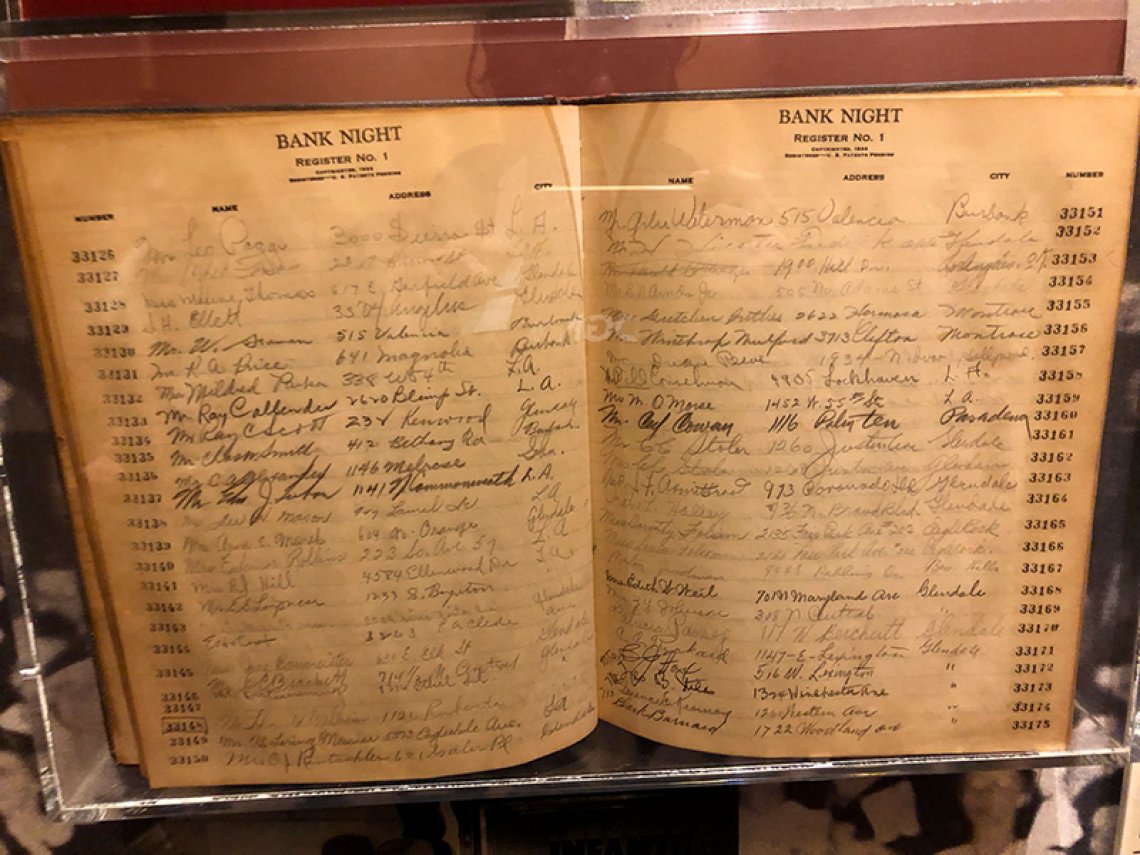 To enter the theatre itself you have to walk through a small courtyard area between the ticket booth and the main entrance, and in this space several of the sponsors had set up booths. Heart Beat Dice, Nord Games, Meetup, Next Gen Games and Roll20 all had tables there to either giveaway merchandise, discuss their work, or to sell wares.

But on a special note, Frog God Games had a table, but they didn’t offer any products, free or otherwise. Rather, they handed out two essays, one that was titled “Boots on the ground: Fighting Autism with role playing games” by Rachel Marsh, and “Delving the Social Labyrinth” by Ian McGarty. Despite having some rather impressive titles under their belt, they chose to hand out these essays instead.

Moving through the courtyard, I had the pleasure of meeting others who share such a heavy love for D&D. A friend once told me that, as long as other people could see how much I love D&D, that I would be fine. And to see that kind of regard for the game in others that night was reassuring and relieving. I’m no stranger to being around people who share a heavy interest in the game, and in the past year I found myself becoming a part of the online D&D community. But here at Lost Odyssey, I was able to find people who love the game as much as I’ve seen in some of the online friends I’ve made, but in person.

And while meeting new people and discovering others who were just as happy as I was to be there, I saw a sign they had set up.

“Why do you love D&D?” it asked. There was a small film team there who, should you so choose, would film you in front of a small red curtain while you answered that question. I went to Lost Odyssey asking myself “What is D&D?”, but that question was replaced by this new one. I knew I loved D&D, and I stood there listening to others as they described why they loved D&D. I had never thought to ask why I loved it myself before, I realized. At around 7:30pm we all filtered into our respective seats. For nearly three hours we sat there, enraptured by the tale that Deborah spun. In it there were not only lions, a flying ship, a river to cross, a manor, or a villain, but also genuine camaraderie. A growing rivalry between the greatest dungeon delver alive and a kindly grandmother monk. A potion seller with a chipper attitude and clever form of spell slinging. A bard of grace and poise who rocked out on a harp. A gruff warrior who faked out the entire audience with one of his weapons. And a ranger looking for a way back home. Watching them all play this game together, play off of one another, and win together made for a night that I don’t think I’ll ever forget. 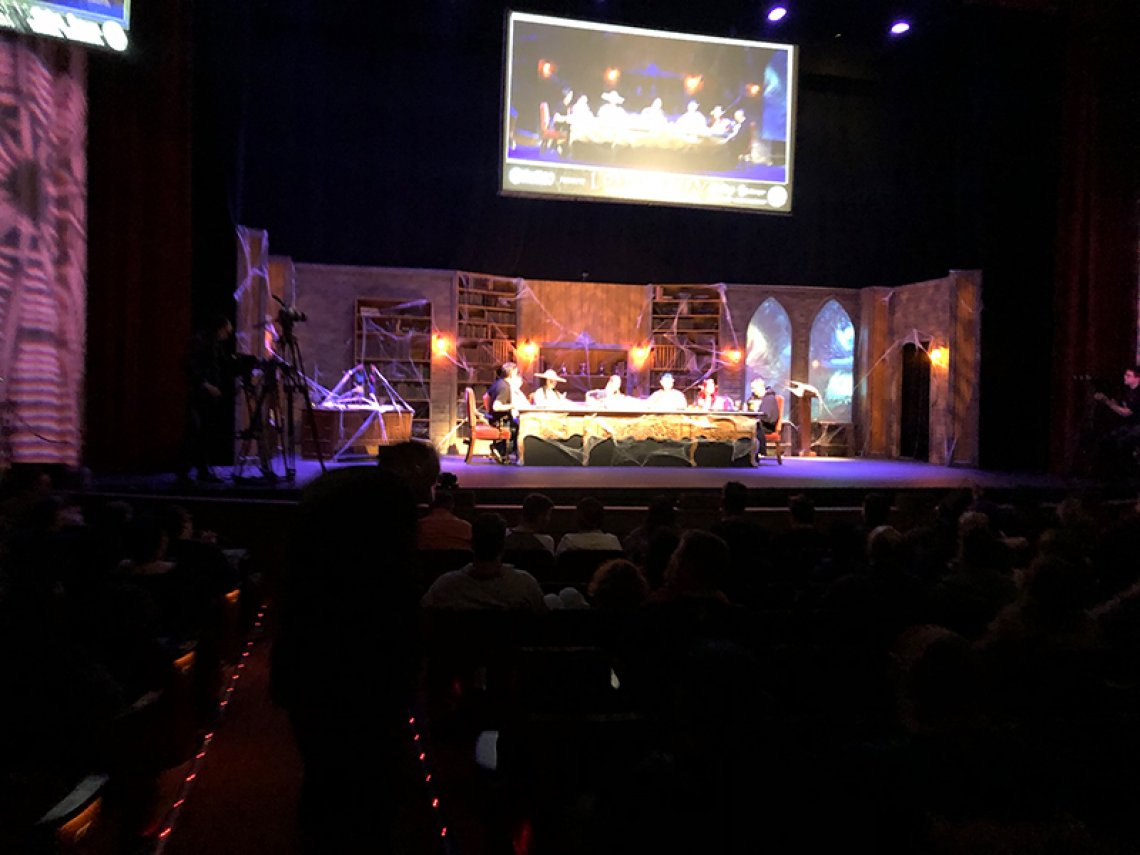 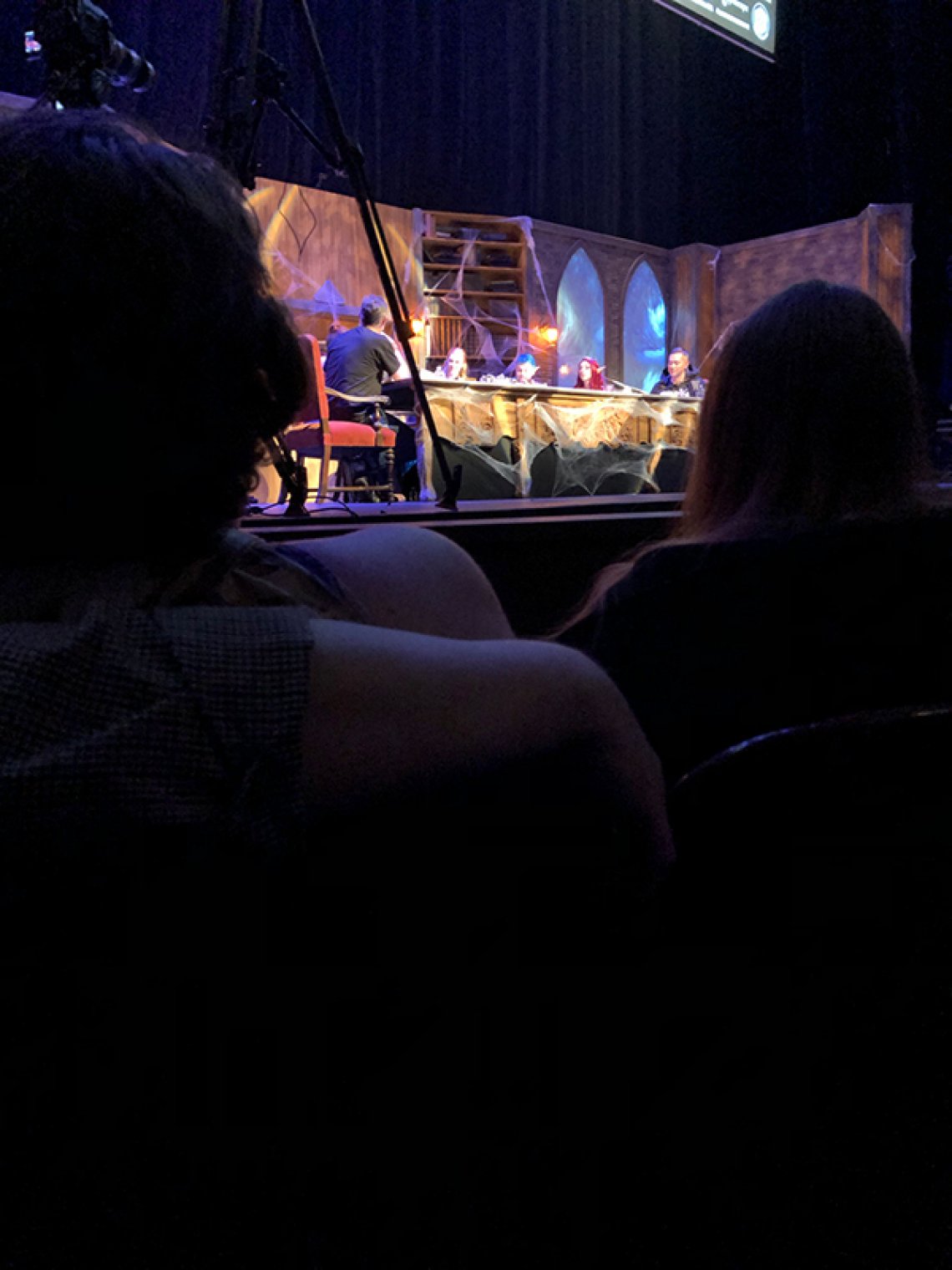 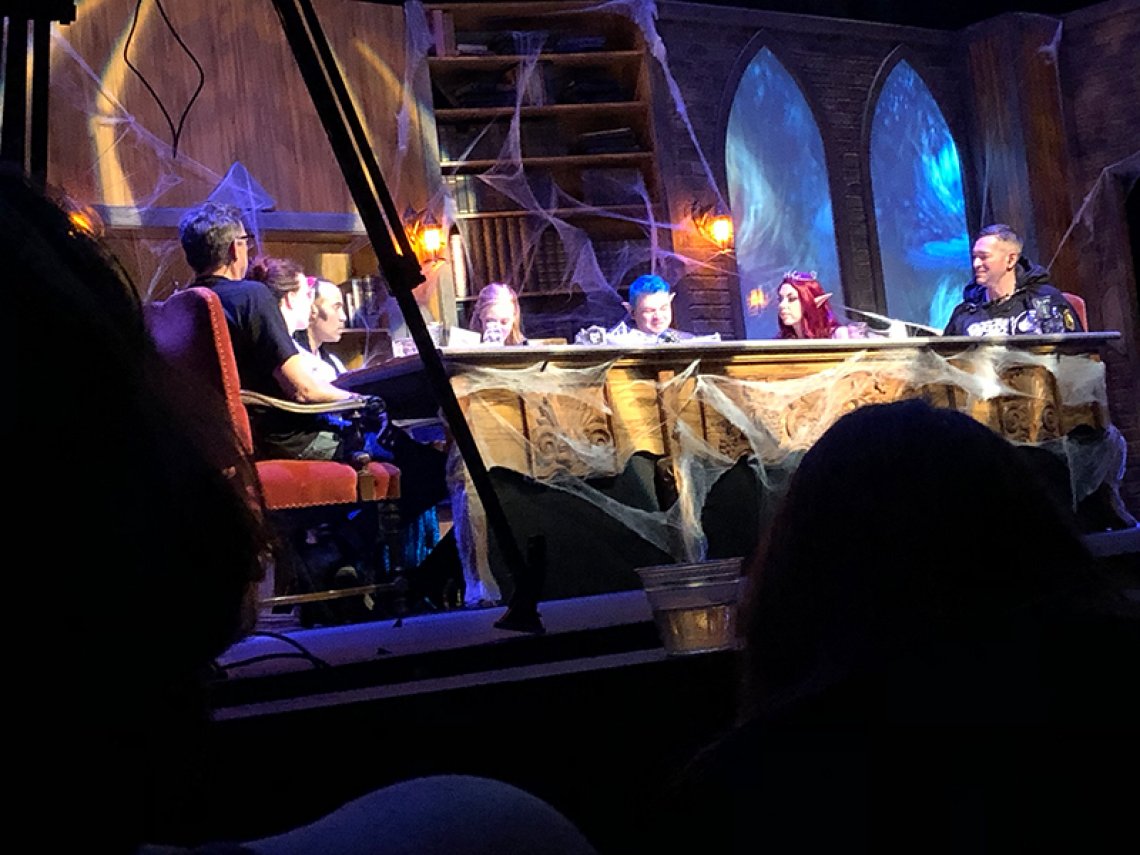 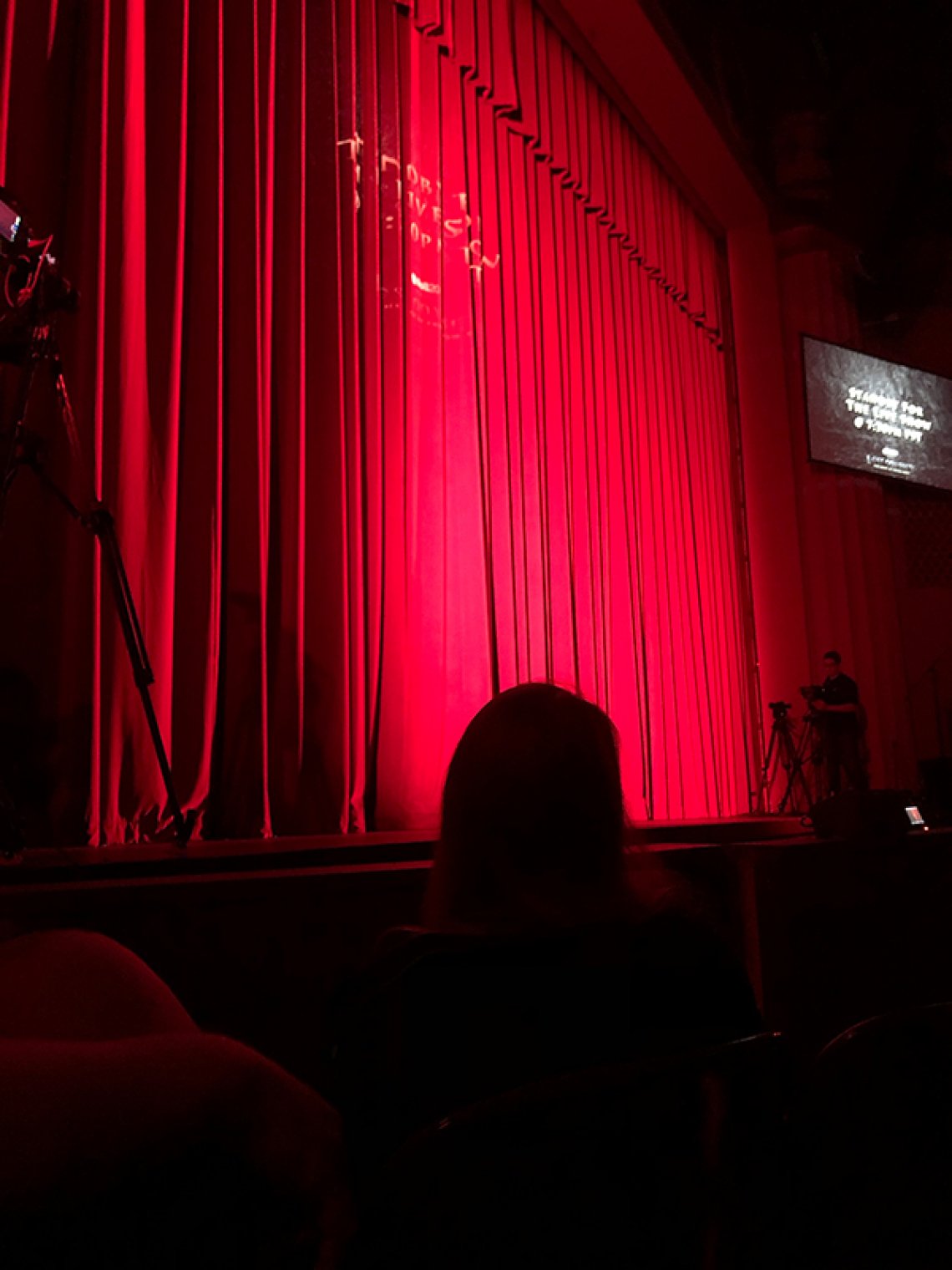 Watching them roll with their failures, work together to figure out solutions, and overcome the harm they came by are things we hope to see in the games of D&D we ourselves play. Seeing them come out on top at the end of the night felt like watching friends overcome an obstacle. It felt like watching heroes win in the stories many of us grew up on, when they were far more simple. In short, it felt good.

And it felt great knowing that they could hear us. We were all aware we were watching a show, but the production quality made it feel like we were there watching a live movie. It was directed expertly by Deborah, but it was actively responded to by us. They heard us cheering them on each time we felt so inclined, and they could hear us laugh with each quip they made and, like any good game of D&D, there were plenty that were gold. It was interactive storytelling not limited to the players and the dungeon master, but between those on the stage and off.

After the game ended, Lucia and I stuck around. Whether it was thanks to being associated with another company I work for and the people I know from that, or because DungeonFog provided me with a DungeonFog t-shirt to wear at the event, we were able to stay around after most of the audience had left. People say not to meet your heroes, but this felt like meeting your friends. I’m exhausted after running a session of D&D, but to their credit they were nothing but cordial and energetic and happy. Without exception, the person who they are on-stage when playing the game is who they are off-stage when being themselves. 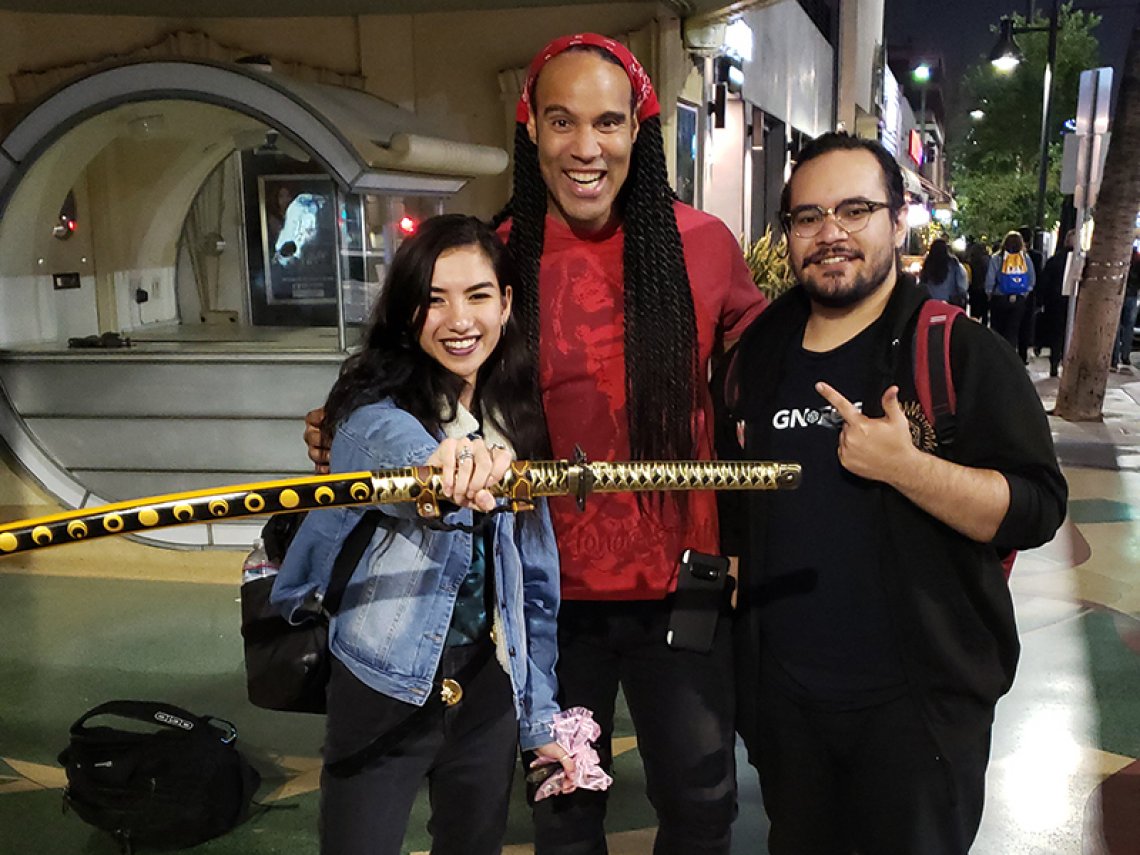 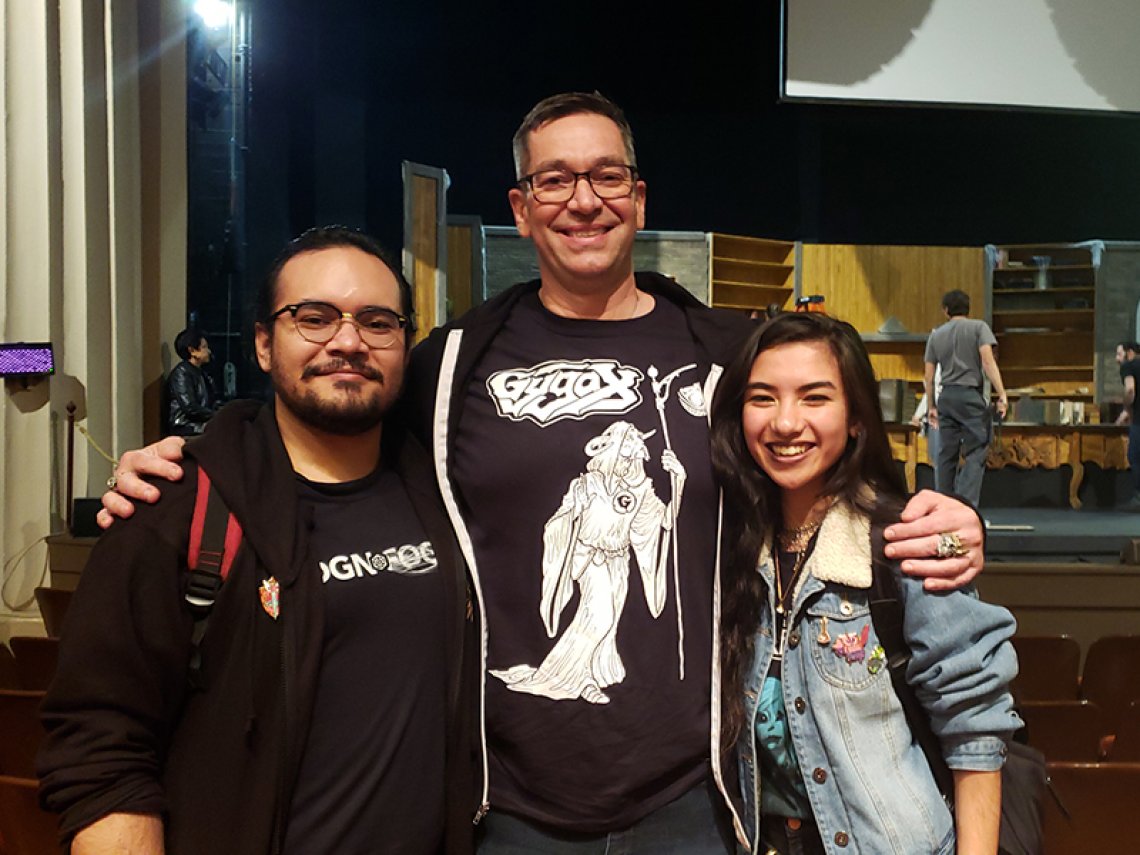 The only sour note of the night was watching the lights and the last few people leave. When the final lights went out, I knew this dream of a night had finally come to a close. The next day, I knew, I would hop back onto a plane and be so distant from the friend I went with to the event and the people I had the honor of meeting. And time would become a growing wedge between that moment in time where I was able to be there.

But still with me was that question they had on the sign.

Why do you love D&D?

I’m not sure I have a succinct answer for it yet. I may never will, or it may change or grow in the years to come. But right now I can say that D&D is what my father passed down to me, and it has grown into the vehicle that not only lets me become a better and better storyteller, but the best way in which I make new friends. Friendship, true friendship, comes from a place of understanding and caring, and it's from these places that Lost Odyssey came to be. So to be there that night, it felt like being around friends. And to leave it felt like a great number of goodbyes.

Please don’t get me wrong. The goodbyes didn’t bring me down, and they still haven’t now. Because for a single, wonderful night, I was able to be warm and laugh wholeheartedly among friends as we enjoyed a story.

And isn’t that something we can all love about D&D? 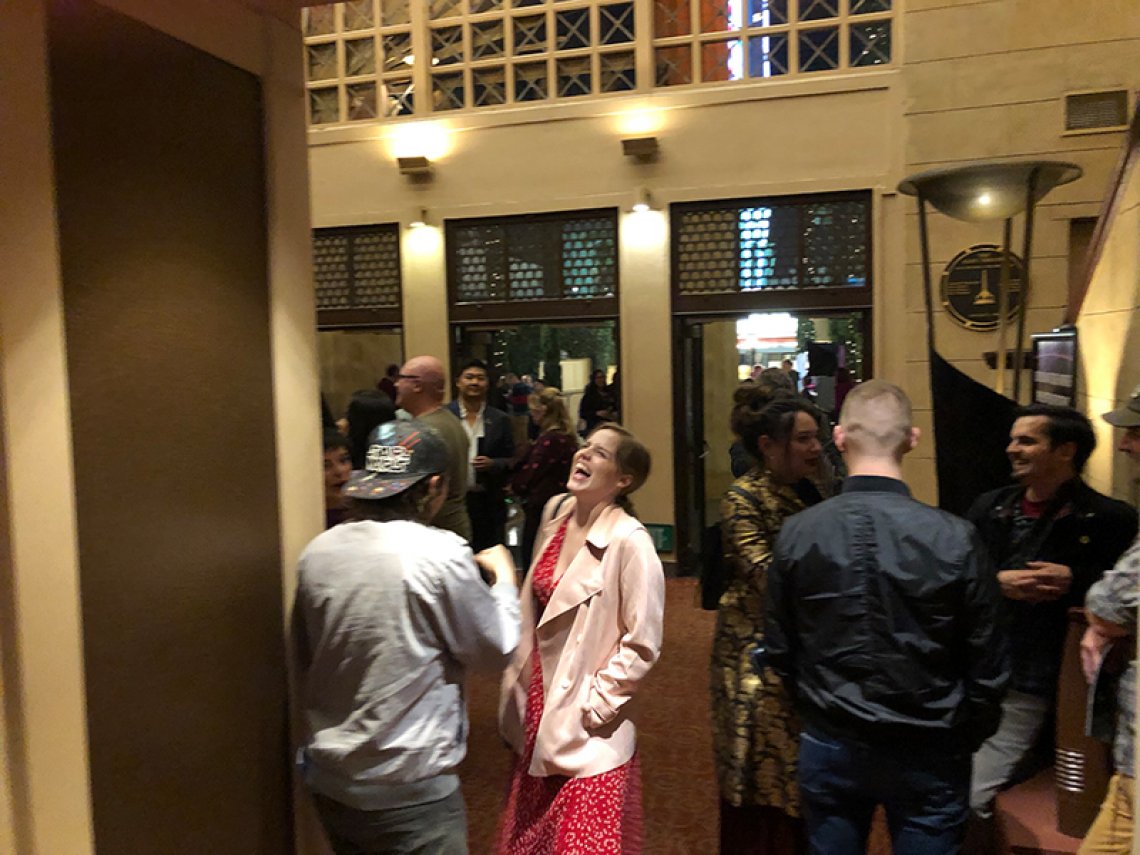 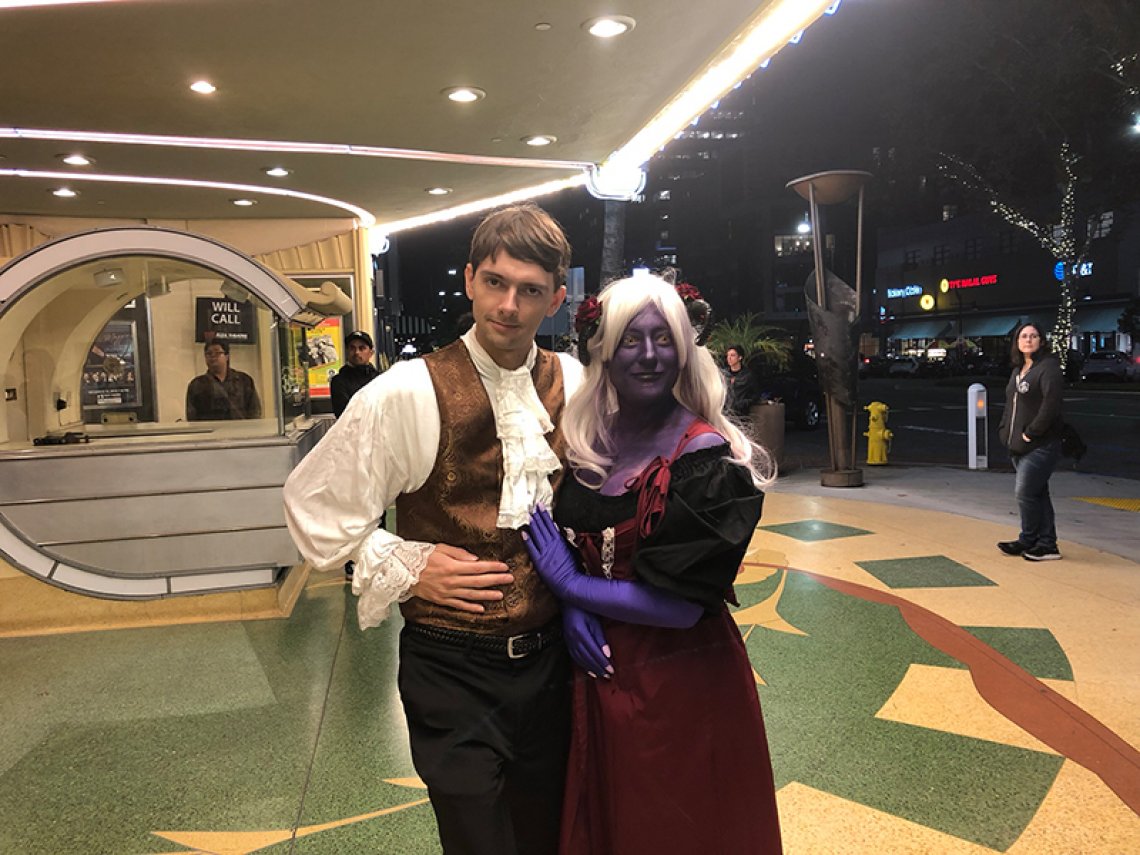