Hello and welcome to our October update about DEIOS

ALPHA 1 just launched two weeks ago and after a short break we are back working on the feedback and reports we have received from you. Learn about how we plan to move on and what to expect the coming weeks in this months Mapping it out.

SPIEL is Europe's largest game convention focused on board, family and roleplaying games. It takes place once a year in Essen, Germany. Due to the current situation this year the organizers decided on a full digital approach which took place from thursday the 22nd to sunday the 25th of October.

This meant for us to stream for you over on twitch.com with guest talks and brilliant workshops. Although it was exhausting we need to thank the over 1.000 viewers for participating and we hope you had a good time and enjoyed the streams.

Besides our own program we had a pleasant time watching our friends and partners during their online plays and workshops but we are looking forward to a safe future where we can meet again in person.

In general we were really happy how well the distribution of the ALPHA went. Around 1.200 people have downloaded the ALPHA 1 so far and keep testing it.

Unfortunately we had two major oversights which created an unpleasant experience:

First was missing code signing which leads to an ugly dialog which evaluates the installer as an untrusted application. We promise it is a trustworthy application and we just have missed the timelines on applying for the certificates necessary.

The second oversight was the Visual Studio C++ Redistributable which is a framework by Microsoft our application needs in order to run. This is a programming package which is usually bundled with the installer but since we all work development machines with this already installed, we have not noticed it.

We are updating the installer in order to fix these two major issues.

Our ALPHA testers have filed almost 5.000 reports including crashes and general reports which is amazing. It is unusual to be this excited about bugreports and crashes but we needed this amount of information to find the causes for certain issues and crashes.

With your help we could identify three major causes for the crashes which are:

In addition to that our testers have created almost 200 reports which we will sort by hand to address them in our development cycle. 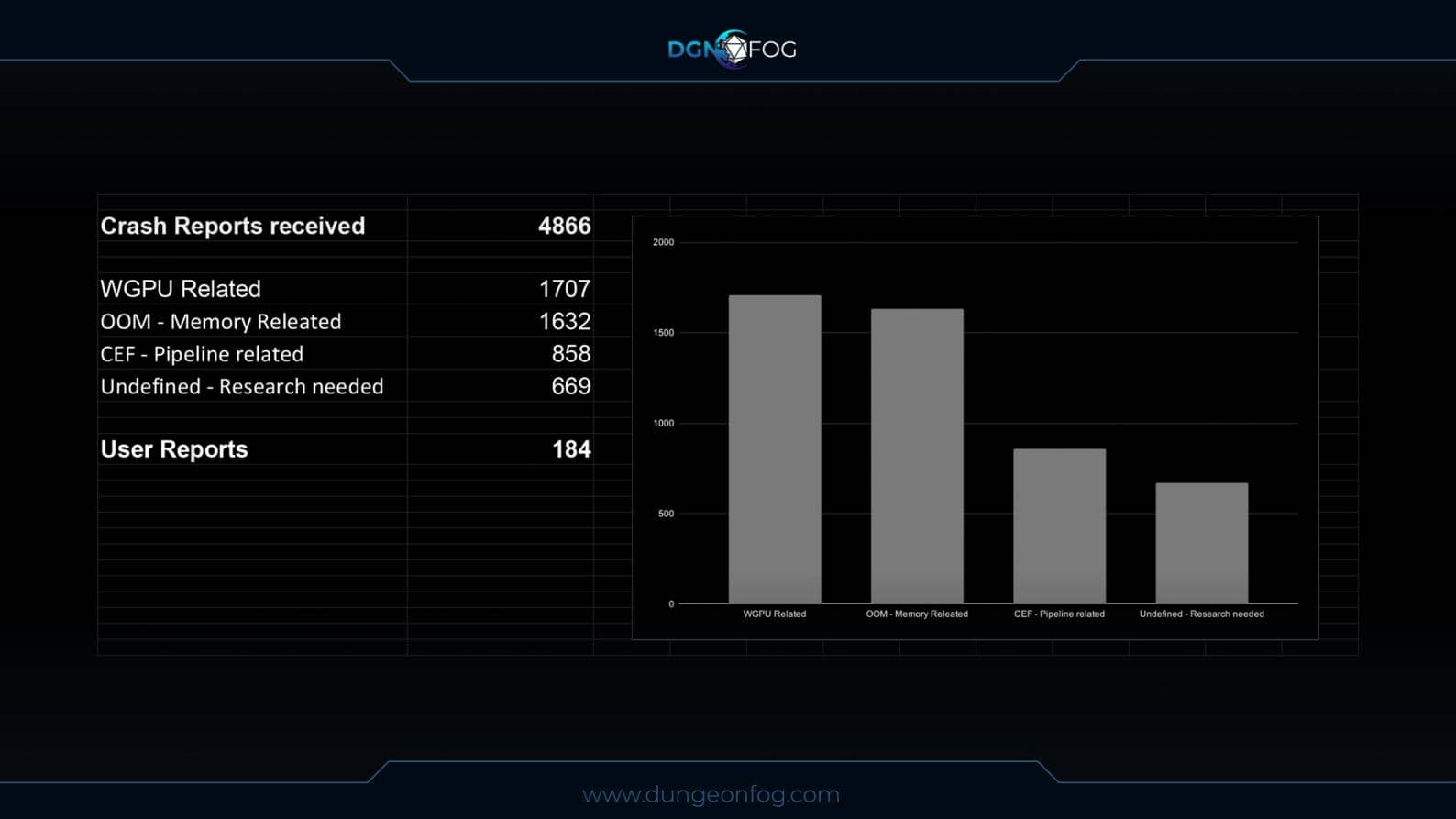 This week the whole development team goes into full analysis and investigate solutions for the issues found. After that we take the results and prioritise those solutions because we expect to find dependencies between those so we can fix multiple issues at once.

We will release a first update in November which will include code signing, the Visual Studio C++ Redistributable and the first bug fixes.

Since we don’t yet have an auto updater you will need to download and install the update manually with . We will notify you through our usual channels and also the application itself will display a prominent update section.

One last thing: We are asking you to keep up your brilliant support by reporting bugs and issues. 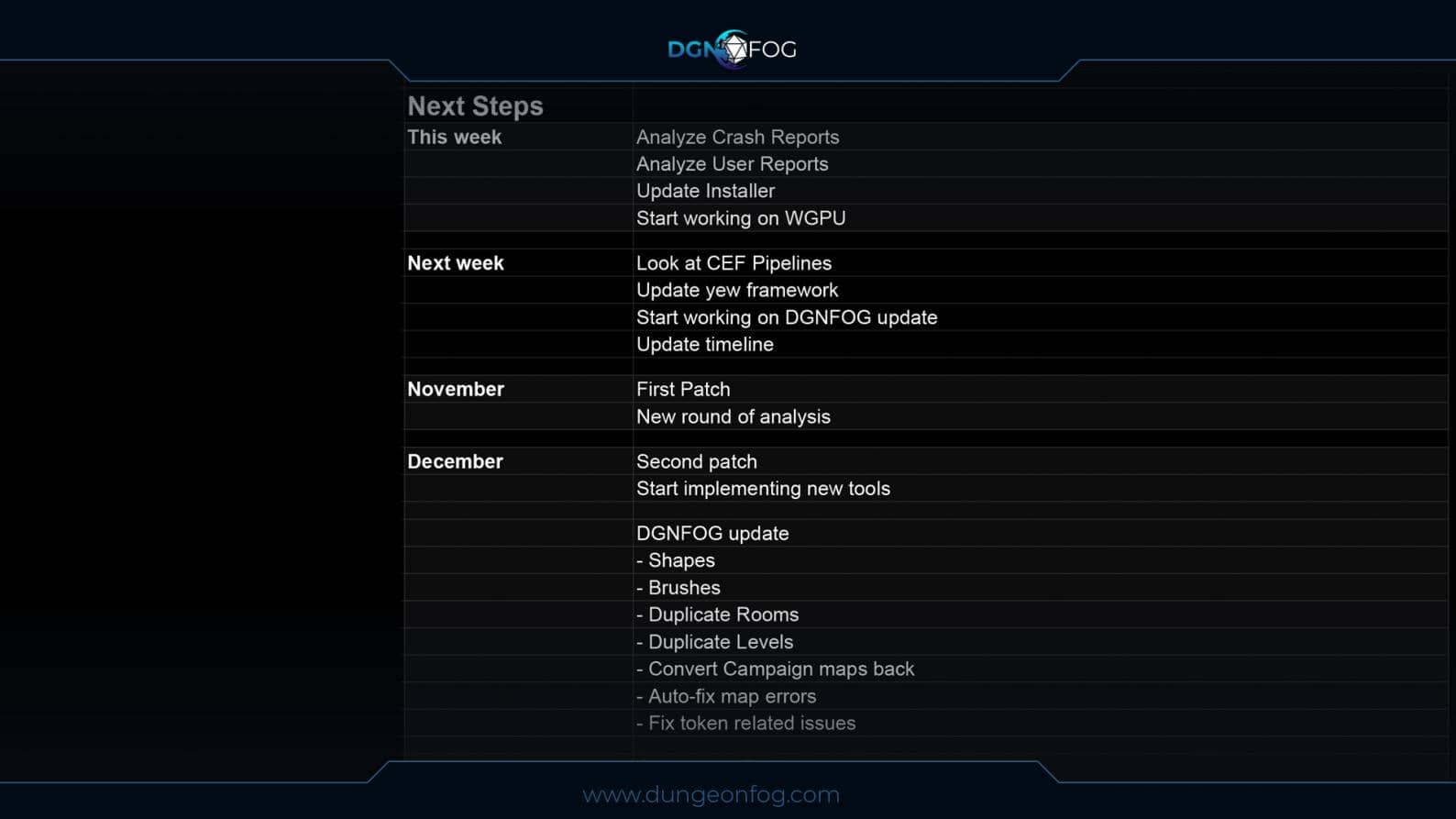 First let us present you the new Halloween themed asset pack with 28 brand new assets working on different settings. Toni, our artist did a great work capturing the horrors one can encounter in the coming scary nights. Create haunted mansions, lost asylums and other creepy places with this shockingly good asset pack.

In addition to that Toni is finishing up a portal he created on one of our livestream during SPIEL.digital which comes in three different variants.

Usually during SPIEL we award our visitors and DGNFOG users with a virtual badge in their profiles. This year we come up with an alternative to assign these to your accounts so stay tuned!

We still have some unfinished changes lying around and also want to tackle some new and highly requested features. It is uncertain if all those changes will come with one huge update or we split it up into smaller packages but it is definitely our priority to bring all those new things to you.

These tools already exist but we are working on a major overhaul. Brushes will behave like props and you can brush over existing objects.

The shape tool on the other hand will be extended so you can edit the shape afterwards like the room tool. In addition to that you will be able to paint shapes with a brush too.

Since the shape tool is very similar to the room tool, we are also playing with the ability on brushing rooms instead of placing the corners. At the moment this is just experimental and will come with a later update.

Other changes and requested features

There are some other highly anticipated features like duplicating levels and rooms will soon find their way into the Battle Map Editor and you will also be able to convert campaign maps back to normal maps.

Other smaller quality of life improvements like auto fixing corrupt maps, bug fixes and performance improvements will be part of these updates too.

Be part of our community
Get feedback and support from our wonderful Discord community!
Ask questions about map making, get help with the tools and join our discussions about game master tips & tricks, player advice - and much more!
join us now